His Beatitude Sviatoslav: I ask God to help fulfill the mission entrusted to me, leaving nothing to myself 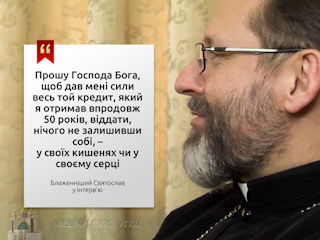 In an exclusive interview for “Zhyve Television,” His Beatitude Sviatoslav, Head and Father of the UGCC, shared his thoughts on the past years and expressed hope for the future. The patriarch recalls the past with gratitude and in the ministry of the Head of the Church he sees an opportunity to repay those gifts that were once entrusted to him by God, his family, the Church.

Answering the questions of the journalist of “Zhyve TV,” His Beatitude Sviatoslav noted: “I can say that in those fifty years there was a lot of life.  And I want to thank the Lord God for all the active waves of life, the moments that He has given me to this day.”

The Head of the UGCC shared with his interlocutor the feeling that he has always been “in a hurry to live,” because at a young age he took on many duties and responsibilities.  “I have always had a feeling that the Lord God has given me a certain credit – whether it is certain opportunities, or the people He has placed around me, or gifts or abilities, which, ultimately, every person has,” said Head of the UGCC.

He said he felt most of the credit of trust shown to him by the people who had always been there, his parents and relatives: “They gave me the feeling and understanding that they trusted me.”  However, the greatest gift that the Primate of the UGCC has received in his life is faith in God.  “This is a gift I received in my family, from my parents, from my grandmother and my grandfather,” said His Beatitude, adding that, like the Apostle Paul, he felt indebted to those people who may still not believe in God.

In an interview, the Primate also mentioned with special gratitude the opportunity to study abroad.  He spoke of his great thirst for knowledge, especially theological one, which, in his opinion, was caused by the circumstances of the persecuted Church: “When it became possible to study, I always did it with the idea that I was studying for someone, not for myself.  “I remember,” His Beatitude Sviatoslav recalled, “that in the 1990s, there were many seminarians, many young men and women who wanted to give their lives to God but not all of them could study abroad.”

The ministry of the Primate of the Church is an opportunity for His Beatitude Sviatoslav to return this credit of trust: “I have been repaying my debts for almost ten years, trying to share what the Lord God has given me, and I do not want to let anyone down in his/her expectations.”

In addition, the Head of the UGCC expressed the hope that the Lord would give him the strength to share all the gifts he had received during his 50 years of life: “I ask God to help me fulfill the mission of my life without leaving anything either in my pockets or in my heart, but to give back everything I received,” said His Beatitude Sviatoslav.