Interesting facts about the Shroud of Turin. How did the Lord’s Face get into our temples and what do the scholars say about it? 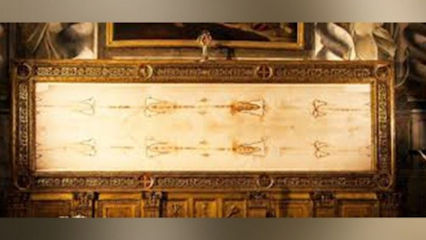 We are all used to the fact that the shroud of Jesus Christ is an integral “attribute” on the way to the resurrection Sunday. The tradition of worshiping the Savior’s hands-on image has become so sacred that few would have guessed it was not always the case. Shroud kissing on Good Friday turned into a whole rite of commemoration of the suffering of the Lord and the love with which He died for us on the cross. However, as it turned out, the symbol of the shroud and its use in worship appeared in Christian realities not too long ago.

When did the shroud appear in Christian temples?

The Christians of the Jerusalem Church of the first centuries “forgot” about the shroud and chose a slightly different symbol of the Passion of Christ. On Good Friday, they worshiped the godfather – the same one on which the Savior was crucified. Each year, on Good Friday, the bishop held in his hands the ends of a holy tree with the inscription on the cross, and the faithful from a low bow touched the cross with their foreheads and eyes, kissed it, and departed. To this day, this tradition has come to pass, but it is not limited to Good Friday. It was only in the sixteenth century that the followers of Christ gave birth to the rite of laying the holy shroud. At the same time, it became the centerpiece of Good Friday evening and Holy Saturday mornings.

As Christian believers around the world worship the shroud as an image of God, scholars have been steadily studying the phenomenon of its creation. “This is a document that looks as if it was expected in our time,” said Pope John Paul II, and he was certainly right. This eternal reminder of the Passion of Christ has become a kind of puzzle for scholars who cannot make up their minds solely by logic.

A piece of linen cloth over four meters in size, depicting a naked Christ after the crucifixion, is today stored in the Italian city of Turin, under constant computer control of pressure, temperature and humidity. For the sake of the “preservation” of the world’s Christian relic, scientists placed the shroud in an expanded form in a transparent, armored glass box weighing 1,100 kg and filled it with inert gas. Although the non-man-made image of Christ is preserved in the left chapel of the Turin Cathedral, access by outsiders and pilgrims is forbidden. And the study of its origin does not stop today.

According to one version, the image on a piece of fabric appeared due to the action of a powerful stream of light. But even nowadays none of the existing sources is able to produce the same amount of radiation required. Interestingly, the entirety of the shroud’s uniqueness, humanity could not comprehend until one important discovery – the creation of photography. In 1898, Secondo Pio photographed the shroud and was amazed: all that was impossible to see in the image was negated in the image! Since then, scientists have begun to study this earthly miracle.

Science is not always contrary to religion

What the scientists did find out did not surprise Christian believers at all. There is really not a drop of paint on the shroud. The image is visible due to the darkening of the fabric. The blood residues are also real. Although, according to scientists, no traces of body smudging on the shroud have been found – which is not surprising, because the body of the Savior has not succumbed to death. The age of the shroud dates from the beginning of our era. That is, for the period of the life and resurrection of Christ. This was detected by infrared and Raman spectroscopy. The only thing that still causes a flurry of discussion is: why is the shroud known to history only from the sixteenth century?

According to tradition, the non-man-made image of Jesus Christ was kept for some time with the Apostle Peter, after which it was passed on from disciple to disciple. Although the original shroud is still not accessible to worshipers today, there are some “official” copies that are exhibited in prayer temples. And thousands more Turin Shroud analogues can be found in Christian temples around the world, before which we bow the heads of each Good Friday – with humility and memory of the love with which Jesus Christ went to crucify for each of us.