A monument to His Beatitude Lubomyr Husar will appear in Vinnytsia 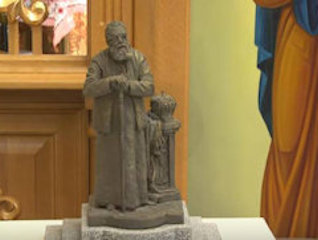 In Vinnytsia on the initiative of Fr. Hryhoriy Rohatsky, rector of the Church of the Intercession (Pokrova) of Our Most Holy Lady Theotokos, a monument to His Beatitude Lubomyr Husar will be built. The sculptors have already started working on the project.

As Fr. Hryhoriy told in the morning program “New Day” of the Ukrainian radio “Vinnytsia,” it is the simplicity which was inherent in His Beatitude Lubomyr that catches one’s eye when looking at the sketch of the monument. According to the plan, Lubomyr Husar will be depicted in full length, wearing a vest over a cassock and leaning on a stick. There is a pilla next to him.

“It is a manifestation of something inviolable, an image of the Church. On the pillar there is a mitre and falling clothes … These things still belong to him, but they have been abandoned already. They symbolize his adequacy and understanding of the situation. He deliberately renounced the government and warmly handed over power to his successor. The sculpture shows that he leaves everything and moves forward with the wisdom that the Lord gave him, in his simplicity, leaning on a stick like a sage. His gaze is turned to heaven to bring this simplicity to people…” said the initiator of the project.

The authors of the monument are two Ukrainian sculptors – Oles’ Sydoruk and Borys Krylov.

He said that while looking for the mitre (the bishop’s headdress – ed.), the sculptors encountered certain difficulties. “It turned out that during his life, His Beatitude Lubomyr distributed all his mitres. And when he died, there was a problem with which mitre to bury him. That is, he was not attached to material things, even to those that seemed important to the bishop. In my opinion, this shows true greatness of such people. They are not attached to anything but God,” said Fr. Hryhoriy.

According to the priest, the idea of a monument in Vinnytsia to His Beatitude Lubomyr did not arise accidentally. “He was in Vinnytsia twice, and it was impressive every time, because people who had nothing to do with the UGCC came to meet him… In addition, Lubomyr Husar’s father used to visit the Vinnytsia region when he served in the Ukrainian Galician Army.”

It will be a spiritual memorial cast in bronze, says the priest.

In total, the production of the sculpture costs 37 thousand dollars. “We have already collected 10,000. And on March 5, we have already handed over these funds to the sculptors and they have already started work on the monument. We are still looking for the rest of the money,” said Fr. Hryhoriy Rohatsky.

However, the priest said, this is not most important thing. “We need to revive the memory about His Beatitude Lubomyr Husar. We don’t just want to create a monument to him. We want the wisdom he left us to help people grow in holiness,” he said.

According to him, even people who have nothing to do with the UGCC join the fundraising campaign. Some say that they came to know the Ukrainian Greek Catholic Church through Lubomyr Husar.

There is no definite place yet (for the monument – ed.). The father calls on the local authorities and people of good will to join in the choice of location.