Head of the UGCC: Let us not resort to apocalyptic thinking. It is detrimental to our health! 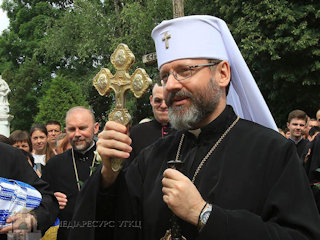 One should not fear that some period of our global culture is ending. I would not advise fostering apocalyptic moods as it is very damaging to your health. The Lord God is always an ally of human health.

This opinion was expressed by Father and Head of the Ukrainian Greek Catholic Church, His Beatitude Sviatoslav during the live stream of Radio “Maria” program.

The Primate noted that the Christian faith, which bears a light of hope, is a necessary element in the fight against disease.

“Your mood and optimism are necessary elements to fight the disease.  When you lower your arms, you become an ally of the enemy.  When a doctor comes to the patient, three actors come into play: the doctor, the patient and the disease.  The success of treatment depends whose side the patient will join.  In the Christian sense of illness, the fourth person enters the game – the Lord God, who is always an ally of human health.  The Lord is an ally of the doctor who is seeking a solution, and then the believing patient is on the side of the one who is fighting the disease.  Do not despair, because then you are on the side of the disease,” he explained.

His Beatitude Sviatoslav recommended that the people who are quarantined should read the book by the famous Italian classicist Alessandro Mansoni, “I promessi sposi”, which translates as “The Betrothed”.  The book deals with the plague in Milan in the early XVII century.  He is convinced that this book will help us understand how to act today.

“Each time such pandemics swept Europe, they were the markers of the end of some historical and cultural period and the beginning of something new,” noted the Head of the UGCC.

The Head of the Church highlighted the positive changes that have taken place in the Church in connection with the implementation of quarantine measures.

“First of all, the intensity of communication between the priest and the faithful via telephone or internet has increased;  second, the level of communication between bishops and priests has increased;  third, we have a new neo-logism “ZOOM Days.” Most of our structures are working online and do not need to be in the same room.  Fourth, during online broadcasts, the Church seeks to provide people with worship texts.  In general?  The moment of unity in prayer has become the central event of the day,” he summed up.

Quarantine time coincided with Lent, and many believers shared that they had never had the opportunity to experience as deeply as during the quarantine Lenten Divine Worship services.

“We have a unique opportunity to revive our pastoral care.  I hope that spiritual hunger and thirst will fill our temples again after the quarantine is over,” said the Head of the Church.