Cardinal Pietro Parolin visited the Synod of Bishops of the UGCC 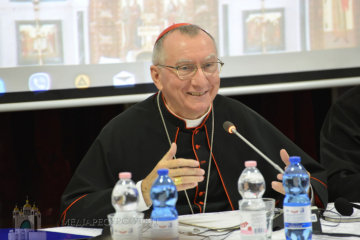 On September 3, 2019 to the invitation of His Beatitude Sviatoslav, Head and Father of the UGCC, cardinal Pietro Parolin, Secretary of State visited a session of the Synod of Bishops of the UGCC which takes place in The Ukrainian Pontifical College of Saint Josaphat in Rome on September 1 -10.

“I am really glad to meet you during your session here, in Rome. I am grateful for this wishful brotherly invitation. Over the years, Pope Francis assigned me to the service of the Secretary of State. There have been plenty of important occasions for meetings with the Ukrainian Greek Catholic Church which gave me an opportunity to know you better, share with you your joy and hope equally with all your worries and anxieties”, addressed cardinal Parolin to the bishops of the Synod.

Secretary of the State mentioned that the UGCC is observed on different continents and “is characterized by a clear identity, which derives from a spiritual, liturgical, catechistic and canonical tradition the bearers of what you are and reveal in”. “Simultaneously, it has a special relation to Ukraine, where its historical roots come from and where it presents the majority of the society. Taking a chance, I am reinforcing my solidarity with Ukrainian people in the time of their sufferings caused by war, which has been lasting for over five years. I am praying to the Lord of peace inspire the initiatives and actions which could stop this violence and heal deep physical and moral wounds which reasoned thousands of deaths and made a lot of families look for a better future somewhere different”, assured the cardinal.

A Vatican noble man pointed at the importance of the meeting called on July 5-6, 2019 in Vatican headed by Pope Francis with the participation of the Head of the UGCC, metropolitans and members of the permanent Synod of Bishops and heads of the Roman Curia dicasteries.

“We were jointly thinking in two voices: the first were hierarchs of the Ukrainian Greek – Catholic Church, the second – the ones who are responsible for Roman dicasteries, regarding political, social, humanitarian, theological and ecumenical issues, accentuating on identity and mission of your Church. It refers to an innovative model of a collaboration the main goal of which is to highlight a common input of everyone, in order to find answers for urgent challenges of nowadays. Clearly, two days were not

He mentioned that among the topics discussed was a point of our responsibility for the mission of Church in new strange situations where we are called to act being evangelists.

Concerning the issue, the cardinal listed the next ways of evangelization:

At the end of his homily the representative of the apostolic capital wished “the work of the Synod was followed with God’s grace and brought abundant fruits”.

Hence, members of the Synod had an opportunity to put questions to the cardinal and express their reflections on the topic of the Synod – the development of the UGCC and realization its mission in the contemporary world.