Let’s foster unity in today’s divided and dispersed world, Pope Benedict XVI to the delegation of the Synod of Bishops of the UGCC 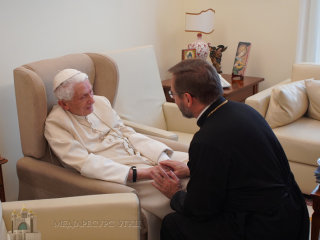 The guests were met by Monsignor Georg Ganswein, Prefect of the Papal household and personal secretary to Pope Emeritus Benedict XVI. “Despite his physical weakness, the Holy Father was pleased to meet with the Ukrainian bishops,” said Bishop Ganswein, welcoming the guests to the Mater Ecclesiae monastery in the Vatican, home to Pope Emeritus.

At the beginning of the audience, His Beatitude Sviatoslav introduced to His Holiness the Metropolitans of the UGCC from different continents of the world and the Secretary of the Synod of the UGCC. He told him about the work of the Synod and explained the main topic that the Synod Fathers were discussing: “Communion and unity in the life and ministry of the UGCC”. “It was here in Rome that our bishops gathered at the Synod to witness our unity with the successor of the Apostle Peter.” The Head of the UGCC emphasized that “our Church preserves in its identity the memory of the undivided Church and our mission is to witness this unity.” This was the reason for the persecution of the UGCC during Soviet times, “when the biggest crime was faithfulness to the successor of the Apostle Peter.”

His Beatitude Sviatoslav also told the Pope Emeritus about the global dimension of the UGCC, its openness to all who wish to “live the spirituality of the Byzantine tradition in its unity with the entire Catholic Church.” Pope Emeritus Benedict XVI asked, in particular, the Ukrainian bishops of the diaspora about the state of pastoral care in their dioceses in the face of contemporary migration challenges. Bishop Borys Gudziak, Archbishop and Metropolitan of Philadelphia, told the Pope Emeritus about the development of the Diocese of Paris and his new ministry to the faithful of the UGCC in the United States.

At the conclusion of the audience, Benedict XVI spoke of the need to nurture and bear witness to unity in a “modern divided and scattered world”. “The modern world needs unity,” said the Pontiff.

It should be added that the Synod of Bishops of the UGCC was held in Rome, in the Ukrainian College of St. Josaphat, September 1-10. The Synod began with the Hierarchical Divine Liturgy at the Cathedral of St. Sophia in Rome on the occasion of the 50th anniversary of the consecration of this shrine. The next day the Synod Fathers were received by the Holy Father Francis, and at the end of their work – by Pope Emeritus Benedict XVI.