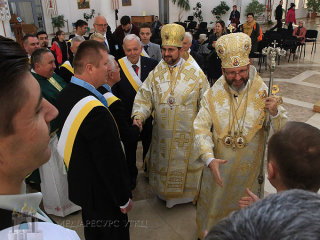 Father and Head of the Ukrainian Greek Catholic Church During His Beatitude Sviatoslav during the Liturgy at the Patriarchal Cathedral of the Resurrection blessed the newly elected Board of Knights of Columbus in Ukraine and named Bishop Mykhailo Bubniy, Exarch of Odesa, as Chaplain of the National Council of Knights. Father Volodymyr Malchyn was appointed as his assistant.

It should be noted that the ceremony for the introduction of the national government of the Knights of Columbus in Ukraine took place for the first time.

“Today in our cathedral we want to pay special respect, to represent as a model school of love a special brotherhood – the Brotherhood of Knights of Columbus. This brotherhood restores the ancient knightly traditions that our people have cherished since the times of the Kyivan state,” noted the Head of the Church.

Being a knight, said the Primate, does not simply mean getting some extra accessory to your costume. To be a knight means consciously, voluntarily, and courageously to take on the responsibility to love. “Yes, because in order to love, one must have courage. A loving person always faces danger. You always become vulnerable to someone who will not accept your love. Knighthood is a courageous way to be a Christian in today’s world. It is a courageous way to live actively: to receive the Sacraments of Baptism,  Confirmation, all those sources of Divine love that flow to the Christian of Christ’s Church today,” the added bishop.

According to the Head of the Church, for the second year in a row, it is the Ukrainian knights who are recognized as the most dynamically growing and developing community.

The Primate noted that if an important case is to be entrusted to someone, he is always looking for someone from the community of the Knights of Columbus.

*** The Knights of Columbus is the world’s largest Catholic fraternal organization with more than 1.8 million members. It was founded in the United States by Reverend Father Michael J. McGivney in 1882.

His Beatitude Lubomyr Husar in August 2005, during the 123rd Supreme Convention of the Knights of Columbus, held in Chicago (USA), invited the Knights to start their activities in Ukraine.

The First Council of the Knights of Columbus at the UGCC was established  on September 20, 2013 at the Patriarchal Cathedral of the Resurrection of Christ, and is named after St. Volodymyr the Great.

Since the foundation in Ukraine, the Knights of Columbus have developed rapidly and are actively involved in many events and important public and church charitable projects. There was established National Council of Knights of Columbus in Ukraine and more than 25 local councils in different cities of Ukraine. This became the result of the fruitful work of the Ukrainian knights.

On May 10-12, 2019, the first National Convention of the Knights of Columbus in Ukraine was held in Ivano-Frankivsk, where the leadership of the National Council was first elected and the ways of further development were outlined.