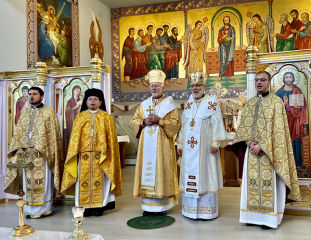 Saturday 2 November 2019, Holy Eucharist Ukrainian Catholic Cathedral, New Westminster, British Columbia Canada: At the invitation of the Most Reverend Ken Nowakowski Bishop of New Westminster, the Most Reverend Volodymyr Viytyshyn, Metropolitan and Archbishop of Ivano-Frankivsk, participated in special events to commemorate the 30th anniversary of the emergence of the Ukrainian Greek Catholic Church from its clandestine existence.

These commemorations began with the celebration of the Divine Liturgy with Metropolitan Volodymyr as main celebrant, concelebrants were Bishop Ken and members of the clergy of the Eparchy of New Westminster at Holy Eucharist Ukrainian Catholic Cathedral in New Westminster.  In his homily Metropolitan Volodymyr emphasized the  “Good Soil” that the seeds of faith found in the hearts and souls of the New Martyrs of the Ukrainian Greek Catholic Church who were Beatified by Saint Pope John Paul II in Lviv in 2001.

The commemorations continued that day with a lecture given by Metropolitan Volodymyr on his life in the Clandestine Church during the Soviet period of Ukraine’s history and the witness of the many bishops, clergy, religious and lay-faithful whom he personally knew.

Metropolitan Volodymyr recounted that in May of 1989 he accompanied Bishops Sofron Dmyterko, Pavlo Vasylyk and Philemon Kurchaba along with Frs. Ihor Vozniak and Hryhoriy Simkailo to Moscow to present a manifest to President Mykhail Gorbachev asking for freedom for their Church. While in Moscow they began a hunger strike in Red Square. This action was reported by foreign based journalist and this news was heard in Ukraine and abroad.

Professor Volodymyr Serhiychuk, of the Taras Shevchenko National University in Kyiv, was also in attendance and spoke about the hunger strike in Moscow that Metropolitan Volodymyr participated in.

Following the presentation by Metropolitan Volodymyr, he celebrated a Moleben to the New Martyrs of the Ukrainian Greek Catholic Church blessing an original icon placed at a side altar in the Cathedral.  During the Moleben relics of three of these martyrs: Blessed Hiero-Martyr Mykola Charnetsky (1884-1959, Exarch of Volyn and Pidlassia), Blessed Martyr Tarsykia Matskiv (1919-1944, member of the Congregation of the Sisters Servants of Mary Immaculate),

and Blessed Martyr Volodymyr Pryjma (1906-1941, cantor in Stradch) were placed on the altar where they will remain for public veneration at the Cathedral.