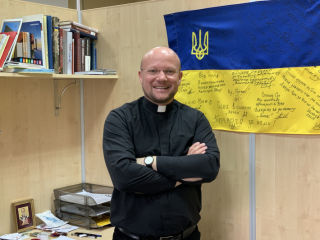 The priest, who turned 38 in October, will become the youngest Catholic bishop in the world.

On Friday, November 15, 2019, the Vatican announced that the Synod of Bishops of the Ukrainian Greek Catholic Church, having received the prior consent of the Pope, made the canonical election of Father Stepan Sus, priest of the Lviv Archdiocese of the UGCC, as Bishop of the Curia of the Major Archbishop of the UGCC. He has been assigned the Titular See of Zygris.

He was born on October 7, 1981 in the city of Lviv to the family of Yaroslav and Oksana of the Bodnar family. He spent his childhood in the village of Chyshky, Pustomitivskiy district, Lviv region.

In 1996, he enrolled at the Buchach Historical and Philosophical Lyceum named after Saint Joseph of the Order of Saint Basil the Great (today the College of Saint Josaphat), graduating in 1999.

From 1999 to 2006, he attended the Holy Spirit Seminary in Lviv, the UGCC, and the Ukrainian Catholic University.

In 2009-2010 he studied at Ivan Franko National University of Lviv, where he defended master thesis on the topic “Man in the context of interpersonal communication: Dietrich von Hildebrant and Emanuel Levinas.”

In 2014-2015 he studied at the Catholic University of Lublin, where he defended his thesis on the topic: “Military Chaplaincy in the Light of the Second Vatican Council,” having earned the degree of Master of Theology.

In 2015-2017 he studied at the licensed program of Ukrainian Catholic University for Pastoral Theology.

On June 30, 2006, Archbishop and Metropolitan Ihor Vozniak of Lviv ordained him a priest in St. Yura Cathedral in Lviv. In the same year he was appointed a military chaplain of the National Academy of Ground Forces named after Hetman Petro Sahaidachny and a Synkellos of the UGCC Lviv Archdiocese in the affairs of chaplaincy for military, students, orphans, and prisoners.

Since 2011 he has been a parish priest at the Saints Peter and Paul Garrison Church in Lviv of the Lviv Archeparchy of the UGCC.