It is important to build unity of the UGCC, Beatitude Sviatoslav at the opening of the General Assembly of the Pastoral Council of the UGCC 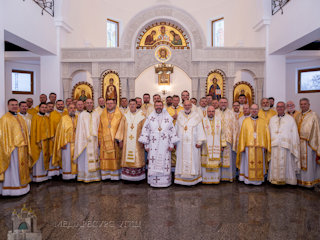 On Tuesday, December 3, 2019, the General Assembly of the Pastoral Council of the UGCC began in the Patriarchal House in Lviv. Thirty five advisers of the Head and Father of the UGCC have come from all over the world to develop pastoral guides, working in partnership with the Patriarchal Curia.

“We are summarizing the ten-year pastoral program, a plan called “Vibrant Parish – Place to Meet the Living Christ,” said His Beatitude Sviatoslav. “This pastoral plan of the global UGCC was highly praised by Pope Benedict XVI and Pope Francis. Pope Benedict XVI called it a ‘new evangelism,’ and when I presented this plan to Pope Francis, he called it ‘a pastoral conversion.'”

According to the Primate, it is now necessary to look for new mechanisms for the next program. That is why this year, during the Synod of Bishops of the UGCC, a working group was set up in Rome to develop a new program for the next ten years.

In addition, the Curia, in particular its central structures, is now undergoing reform so that they too “can experience pastoral conversion and take responsibility for the implementation of the new pastoral plan.”

“We need the Pastoral Council to include not only the departments of the Curia, but also those who are responsible for implementing the decisions of the Synod in each eparchy and exarchate,” said the Primate.

He believes that it is necessary to have a common vision for the Church, and that it is important to learn to be together. After all, the structures of the UGCC in different places of residence may have different visions. “It is important to build unity of the UGCC so that the various structures are closely linked to the center of the Church,” calls His Beatitude Sviatoslav.

In his speech, the Primate also mentioned the Patriarchal Sobor of the UGCC – “Emigration, Settlements and Global Unity of the Ukrainian Greek Catholic Church,” which will take place on August 26-29, 2020 in Lviv. The Sobor’s motto: “The Church is always and everywhere with you.” “I wish that together we could convey such a slogan to our people and translate it into our real lives,” said the Primate.

The main task of the Pastoral Council is to coordinate and unify the activities of those structures of Patriarchal Curia which are responsible for pastoral ministry; to continue to implement the UGCC Development Strategy and other tasks outlined in the relevant Regulations.