Head of the UGCC: Bill 0931 may jeopardize freedom of speech 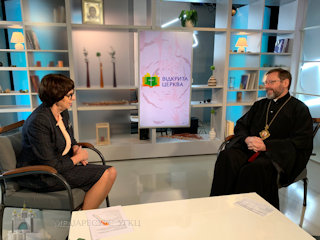 We have to learn to be tolerant, herein, respect a different opinion even when it does not match mine. This draft law about so-called non-discrimination is dangerous due to its probability to persecute different-minded ones.

Head and Father of the UGCC His Beatitude Sviatoslav adopted this attitude taking part in “Open Church” program on “Zhyve TV” and commenting on a bill 0931 registered in The Verkhovna Rada.

The Major Archbishop outlined that exactly the mechanism of this bill claiming its non-discrimination is dangerous to freedom of speech. “Unfortunately, today we are living in a cultural context of post-truth, where some words and terms remain in a state of mutation – concepts drift. Here, talking about non-discrimination today, this bill is about rights and liberties of religious communities to express their beliefs in society”.

In a democratic state everyone has a right for freedom of speech and freedom to express it. “A status of different-minded people, who might be persecuted for their beliefs, can get believers of different religions and confessions”, Head of the Church stated.

His Beatitude Sviatoslav mentioned that Church is worried not only about a fact of some bills, but also a lack of a dialogue and ability to listen to each other. “Sometimes I’ve got a feeling like our officials, working in a turbo-regime, do not listen to society”, he mentioned.

Head of the UGCC thinks that today we need this very dialogue and with all. “I assume that Churches have to master not to obtrude or impose on somebody their beliefs, but testify them. I mean we are ready to communicate our beliefs with others. Yet, we need to have this right. If a bill took this right away from us, we would find ourselves in adverse circumstances without having an opportunity to lead such a dialogue”, considers His Beatitude Sviatoslav.

“In order to avoid any kind of discrimination, we, All-Ukrainian Council of Churches and Religious Organizations are ready to collaborate”, he emphasized.

Head of the Church convinces that Church wants this bill promote a real non-discrimination, not only lobbying interests of some part of society.