Head of UGCC: We must look for ways to switch to the Gregorian calendar 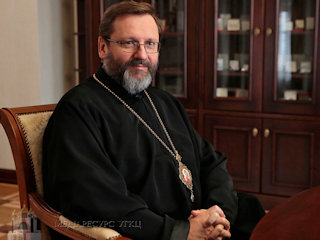 Celebrating Christmas is not a question of date. It’s a matter of experiencing a certain event, experiencing God’s presence among us. We need to look for ways to switch to the Gregorian calendar. This was stated by Father and Head of the Ukrainian Greek Catholic Church, His Beatitude Sviatoslav, in an interview with Radio Svoboda.

“At the same time, we must be aware that we should do this together so that this change of calendar does not destroy the inner unity of any of the Churches,” added His Beatitude Sviatoslav.

The Primate noted that today, December 25, a lot of the faithful of the Greek Catholic Church celebrate Christmas in various parts of the globe. On this occasion, the Head of the Church greeted all the sons and daughters of the UGCC. “Christ is born! May the Lord God who was born today in Bethlehem be our hope, our power to build a better future,” he wished.

In addition to Christmas, we are talking in particular about the Day of the Defender of Ukraine, which is now celebrated on October 14 — the Feast of the Intercession of the Theotokos according to the Julian calendar; this day is traditionally perceived as the day of the Ukrainian Cossacks, as well as a symbolic day of the establishment of the Ukrainian Insurgent Army. According to the Gregorian or new Julian calendar, the Feast of the Intercession will be on October 1.

His Beatitude Sviatoslav also explained that when we celebrate Christmas on December 25, it would mean that the Epiphany, that is, the great sanctification of the Jordanian waters, would be January 6, not December 19; the feast of St. Nickolas — on December 6.

“There is a concept of the so-called Revised Julian calendar when so-called fixed holidays, such as Christmas, are celebrated on the new style, that is, according to the Gregorian calendar. And the moving holidays associated with the Easter cycle, and the Easter holiday itself, remains by the old, Julian, way of calculating this day,” he said.

According to His Beatitude Sviatoslav, these are only disciplinary issues that are raised primarily by the church authorities. And since they do not belong to the essence of the Christian faith, they can be changed. And that should serve some purpose.

“People should inderstand that switching to the new style does not mean switching to invalid dates. It is about changes that should serve to better celebrate certain events,” summed up the Head of the UGCC.