His Beatitude Sviatoslav: I invite everyone to unite tomorrow, March 25, in common universal prayer with Pope Francis 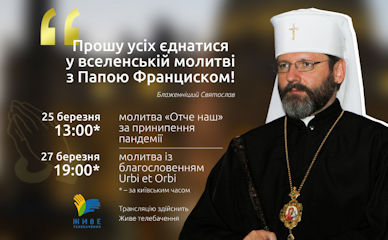 This appeal was made on March 24, by His Beatitude Sviatoslav, Father and Head of the UGCC, during the Moleben’ to the Theotokos in the Patriarchal Cathedral of the Resurrection of Christ, broadcast by “Zhyve TV”.

The Head of the UGCC thanked all the faithful for “participating daily in all-church, national and community prayer.”  After that he reported that on March 25 the All-Ukrainian Council of Churches and Religious Organizations declared a day of prayer and fasting for Ukraine.  Tomorrow, all Churches and religious organizations of Ukraine will be united in fasting and prayer.

“I ask everyone to spend tomorrow’s day in spiritual unity.  In addition, March 25 is the Annunciation by the Gregorian calendar.  Therefore, on this day, the whole Christian world, at the invitation of Pope Francis, will pray a joint ecumenical prayer for ending the coronavirus pandemic.  I ask everyone tomorrow, to be spiritually united with the Holy Father and with us, who will be gathered in the Patriarchal Council in common prayer,” said the Head of the UGCC.

In the Patriarchal Cathedral, the prayer will begin at 1 pm Kyiv time (12 pm Roman time).  Zhyve TV will broadcast this prayer.  The live broadcast will be available on Zhyve TV channel on YouTube or on Zhyve TV page on Facebook.

On Friday, March 27, the Holy Father also announced an extraordinary Blessing “Urbi et Orbi” (to the City and to the World).  Usually, such a blessing is normally given only on Easter and Christmas.

“In order to open the door of God’s mercy widely and to pour out the grace of God on the whole world, the Holy Father calls for participation in it.  At the conclusion of the prayer, Pope Francis will grant a plenary indulgence to all those who will unite with him in prayer,” said His Beatitude Sviatoslav.

The prayer will begin at 7 pm Kyiv time (6 pm Roman time).  It will be broadcast live by the media, including Zhyve TV.

“Let us pray, let us be together, be with God,” invited the faithful Primate of the UGCC.

It is important to note that the daily Prayer for the sick, which began at the Patriarchal Cathedral from March 16, will also take place tomorrow.  Beginning, as usual, at 12.00.