Metropolitan Borys Gudziak about the first year of ministry: Together we are searching for ways to answer the question how to be Christians, the Church in the XXI century 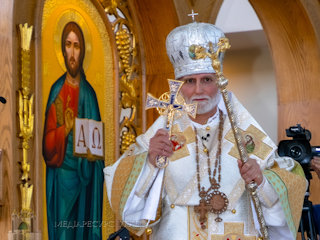 One year ago, on June 4, 2019, in the context of the “From Heart to Heart” Week of Prayer, Celebration, Unity, and Mission, in the Cathedral of the Immaculate Conception in Philadelphia, Bishop Borys Gudziak was enthroned as the seventh Archbishop of Philadelphia and Metropolitan of the Ukrainian Greek Catholic Church in the United States. On the occasion of this anniversary, the “From Heart to Heart” documentary was live-streamed on “Zhyve TV,” an online TV channel of the Ukrainian Greek Catholic Church.

The film directed by Petro Didula includes scenes from the enthronement ceremony led by His Beatitude Sviatoslav. The Divine Liturgy was attended by almost half of the bishops of the Synod of the UGCC, the Papal Nuncio Archbishop Christopher Pierre, the Cardinals of New York and Newark, and the former Archbishop of Philadelphia Charles Chaput, as well as 2000 lay persons. The film also features other Week’s events: a Youth Day, a theological conference at the Catholic University of America, an inaugural lecture by George Weigel, a Healing Service, a festive barbecue, and even an impromptu children’s football game.

The film’s director presents a mosaic of impressions and reflections of participants of different ages, backgrounds, and languages.The documentary features Philadelphians who prepared the celebrations and those who came from different corrners of North America, Europe, and Ukraine “to hand over the bishop to Philadelphia with love” in the words of one commentator. The film touchingly presents the coming together of the diverse worlds in which Bishop Borys Gudziak has lived and served.

“This film, like the Week itself, shares a vision with the acheparchial community. It proposes an approach. Together we are searching for ways to answer the question how to be Christians, the Church, Eastern Catholics of Ukrainian origin in the dynamic culture of twenty-first century America,” said Metropolitan Borys.

He noted that it is symbolic that the film is shown during the week, when Christians who follow the Gregorian calendar have already celebrated the Pentecost, and those who follow the Julian calendar are still waiting for it. “For ultimately our ministry must be God’s work, not ours. We strive to open ourselves to the gifts of the Holy Spirit – wisdom, understanding, counsel, strength, knowledge, piety, and fear of God, so that His fruits – love, joy, peace, patience, gentleness, kindness, faithfulness, modesty, generosity, self-control, and chastity, – come to life,” emphasized the Metropolitan.

For Bishop Borys Gudziak, the past year has been a year of acquaintances and meetings with parishes, schools, youth, and public organizations representing all waves and generations of Ukrainian emigrants. Before the quarantine restrictions set in, he visited 43 of the 63 parishes of the Philadelphia Archeparchy. “I’m getting to know America of the 21 century. I was greeted warmly and fraternally not only by the faithful in the Ukrainian Catholic community, but also by Roman Catholic bishops, American universities, and the Catholic media,” the archbishop said.

“From Heart to Heart” was produced in Ukrainian and English. It can be viewed in both languages on the Philadelphia Archeparchy online resources.