The Eastern Catholic Churches are a treasure for the entire Church; they are indispensable in true ecumenical dialogue, Cardinal Parolin 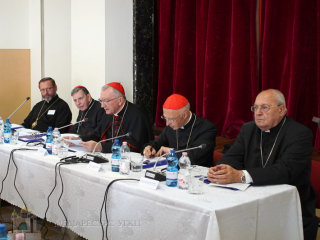 “The Role of the Eastern Catholic Churches in the Context of Ecumenical Relations: Between Pastoral Service and Diplomacy” – was the topic of a report by Cardinal Pietro Parolin, Secretary of State of the Holy See, at the meeting of Eastern Catholic Hierarchs of Europe, which is held in Rome, September 12-14.

“The common method in diplomacy and ecumenical dialogue is dialogue itself,” said Cardinal Parolin, noting that “this method has no other alternative.”

The Secretary of State of the Holy See attended the second session of the meeting on September 12. In his report, he explained the specifics of Vatican diplomacy,         “united with the theme of ecumenism precisely through the method” which, in his opinion, should be central in both spheres – i.e “dialogue, which leads to a meeting in truth and love.” The virtue that characterizes both ecumenical and diplomatic dialogue is patience. The speaker cited his predecessor, Cardinal Agostino Casaroli, who used to define the formula for diplomatic relations with the Soviet Union as “the martyrdom of patience.”

In his report, Cardinal Parolin asked the question: what is the role of the Eastern Catholic Churches of Europe in the current geopolitical configuration between ecumenism and diplomacy? To answer this question, says the chief diplomat of the Apostolic See, “the peculiarities of the location of the Eastern Churches must be taken into account.” “Almost all of them are in the territory of geopolitical tensions. From the Middle East to Eastern Europe and India, the Eastern Catholic Churches, along with their Orthodox brothers and other denominations, live in areas of danger to Christians.”

The Secretariat of the Head of the UGCC in Rome