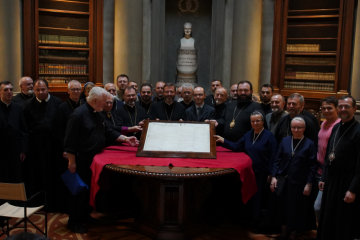 On September 14, His Beatitude Patriarch Sviatoslav with the Bishops of the Synod of the UGCC began a pilgrimage to the relics of St. John Chrysostom in Florence.

In the framework of the pilgrimage, the UGCC celebrates two important dates: the 580th anniversary of the Florence Union and the 55th anniversary of the visit to Florence by Patriarch Josyf Slipy. The visit of the UGCC delegation takes place at the invitation of Cardinal Giuseppe Betori, Archbishop of Florence.

Arriving in Florence, the UGCC delegation visited the Medicea Laurenziana Museum Library, which houses the original acts of the Florence Union of 1439 and Lutsk Psalter dated 1360. In addition, the Ukrainian Bishops had the opportunity to see a translation of the acts into the Old Slavic language that had been prepared for the delegation of the Kyiv Metropolitanate.

At 18:00 His Beatitude Sviatoslav led the Akathist in Ukrainian and Italian in the Baptistery of the Cathedral of Florence, Santa Maria del Fiore. Cardinal Giuseppe Betori and Cardinal Ernest Simoni prayed the Akathist together with the Ukrainian hierarchs and pilgrims. At the beginning of the service, Cardinal Betori greeted His Beatitude Sviatoslav, the Bishops of the UGCC, and pilgrims.