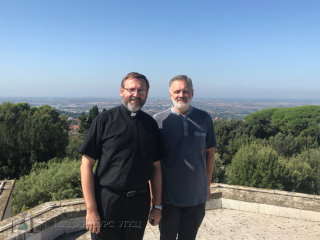 Not far from Rome, in the town of Grottaferrata, is the estate, which was acquired by Metropolitan Andrey Sheptytsky in 1932 for the needs of the UGCC. On Tuesday, September 17, His Beatitude Sviatoslav visited the Villa Andrea, to which the monks had recently moved to study.

Hieromonk Orest Kozak met the Head of the UGCC and toured His Beatitude around the estate, describing the necessary measures for its restoration. The Head of the UGCC expressed his support for the Studite monks  in the restoration of their monastic life in Grottaferrata and emphasized: “The mission started by my predecessor Metropolitan Andrey Sheptytsky and implemented by Patriarch Josyf Slipyj is still of great importance for our Church.”

We would like to add that Villa Andrea stands on the shores of picturesque Lake Albano. The house was purchased as a “princely gift” for students who came from Ukraine to study in Rome. In gratitude for this gift, the students gave the estate the name of Metropolitan Andrey. Today, with the coming of the Studite monks from Ukraine, Villa Andrea is returning its historic mission in the life of the UGCC.