My predecessor, Metropolitan of Kyiv Isidore, stood at this altar, Head of the UGCC in Florence Cathedral 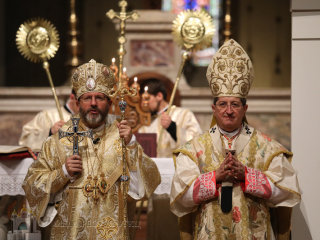 On September 15, at the Cathedral of Florence of Santa Maria del Fiore, a Hierarchical Divine Liturgy was held. It was led by Patriarch Sviatoslav who was joined by the bishops of the Synod of the UGCC. Ukrainian pilgrims from different parts of Italy have arrived in the capital of Tuscany to honor the relics of St. John Chrysostom and mark two important anniversaries for Ukraine: the 580th anniversary of the Florence Union and the 55th anniversary of the visit of Patriarch Josyf Slipyj to Florence.

“We serve the Divine Liturgy on the very altar where the acts of the Florentine Union were signed,” said His Beatitude Sviatoslav in his sermon, explaining the historical significance of the UGCC pilgrimage to Florence.

Another important date that gathered a large Ukrainian community to pray at the main Florence temple is the 55th anniversary of Patriarch Josyf Slipyj’s official visit to this city. His Beatitude Sviatoslav noted that his predecessor’s visit had taken place five years before the consecration of the St Sophia cathedral in Rome.  “At a time when the whole Ecumenical Church, in the new impulse of ecumenical search, wanted to understand what the best model of unity for the Church could be offered both to the Orthodox brothers and Protestants, and to all those seeking the unity of the Church in the new age, he came here,” observed His Beatitude Sviatoslav.

In concluding his sermon, the Head of the UGCC expressed his wish: “Today we want to ask the Lord God of peace, blessing and unity of our Ukraine. We want each of our dioceses, whether in Ukraine, Kazakhstan, Russia, Brazil, or Argentina, to be the center of the whole Ukrainian community. We want the new exarchate for Ukrainians in Italy to be the place where the Ukrainian heart beats on the Italian soil.”

Cardinal Giuseppe Betori, Archbishop of Florence, also participated in the worship. In his speech, he noted that the Union of Florence “should not only be a remembrance of the past. This is the grain thrown into the soil of this city that still needs to sprout.” “The special role in the accomplishment of the Union of Florence,” emphasized the Cardinal, referring to His Beatitude Sviatoslav, “belongs to your predecessor Cardinal Isidore, the Metropolitan of Kyiv.” “I cannot but mention the friendly relationship between Blessed Giorgio La Pira (Mayor of Florence. – Ed.) and Cardinal Josyf Slipyj – two individuals inspired by the search for peace and unity of the Church of Christ. Cardinal Slipyj during his visit to Florence was not able to meet La Pira, but later received a letter from him: ‘Florence is waiting for you again.’ After 55 years, the successor of Cardinal Slipyj, His Beatitude Sviatoslav, Primate of the UGCC, returned on pilgrimage to Florence to fulfill this prophecy.”

The Secretariat of the Head of the UGCC in Rome