Head of the UGCC to the project participants for blind children and Pikkardiys’ka Tertsiia: The spiritual world of such children is very deep and beautiful! 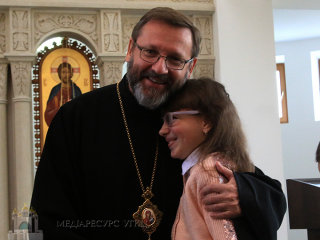 On Friday, September 20, 2019, at the Patriarchal House in Lviv, Father and Head of the UGCC, His Beatitude Sviatoslav met with the blind children and soloists of Pikkardiys’ka Tertsiia working together on the Tale on the White Paws project. Initiative members told the Primate about this project and asked for a blessing from the Head of the Church. The musicians and children also invited His Beatitude Sviatoslav to a solemn concert that will take place in winter at the Maria Zankovets’ka National Drama Theater.

“When I found out that there was such a Christmas program in which blind children could sing, I was very moved. After all, those who do not see the world with their own eyes, especially express it in their heart. The inner and spiritual world of such children is extremely deep and beautiful. And when I heard the name of this project – Tale on the White Paws – I got an incredible feeling of tenderness. This is an interesting symbol of Christmas. Christmas is the moment when we all need a gentle touch of the new-born Savior upon our soul,” said His Beatitude Sviatoslav.

In his view, blind children need a lot of attention. He hopes that their singing will stir the hearts of other people, as such projects are urgently needed for Ukraine. That is why the Head of the UGCC expressed his deep gratitude to all the project participants for their important mission and to the parents (relatives) of blind children for their support.

“This plan helps change the world for the better!” said Oksana Potymko, the project manager, and she presented to His Beatitude Sviatoslav Hryts’ko Chubaj’s collection The Five Books, which was printed in Braille and in large font. The presentation of the collection took place within the framework of the 26th Book Forum, which continues in Lviv.

We would like to add that the financial support of the project is provided by the Ukrainian Cultural Fund. The Christmas album is set to be released this November. The disc will be free of charge, it will be distributed in different corners of Ukraine, and it will appear on the network.