Head of the UGCC: In our meeting with Patriarch Bartholomew, we stated that for the UGCC the Ecumenical Patriarchate is the Mother Church 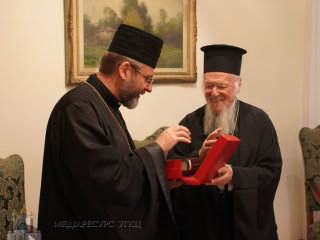 During our meeting with Patriarch Bartholomew, we stated that for our Ukrainian Greek Catholic Church the Ecumenical Patriarchate is the Mother Church. And so communication, dialogue with His Holiness Bartholomew is very important to us. As well as for the Orthodox Church of Ukraine. The Father and Head of the Ukrainian Greek Catholic Church, His Beatitude Sviatoslav, said this in the Open Church program. The interlocutor of the Head of the UGCC was the editor-in-chief of LB.ua Oleh Bazar.

According to the Primate, there were several topics raised during the recent meeting of the Head of the UGCC with Patriarch Bartholomew in Rome.

“First of all, I wanted to explain what the role of the Eastern Catholic Churches is within the Catholic Church today. For example, we, being the bearers of the Byzantine tradition, are interesting for the Roman apostolic capital in terms of how Peter’s ministry of the Holy Father can be done differently. This is what St. John Paul II asked everyone in his Ut Unum Sint encyclical, saying, help me understand today how I can perform my ministry differently. And here we are, from the perspective of our tradition, who can offer it,” said His Beatitude Sviatoslav, adding: “And we want to do this with other Eastern Catholic Churches in Europe.”

“We have also taken the initiative to have some contacts on the part the Ecumenical Patriarchate with the Eastern Catholic Churches. Because today we are members of this mixed theological-Catholic commission, but obviously we are seen by the Orthodox brothers as members of this Roman Catholic group. It would be interesting for us to have our own separate voice, our own separate style in this dialogue, ” the Primate said.

At the same time, the Head of the Church recalled the story surrounding the question of the right of Greek Catholics to serve in St. Sophia Cathedral. “I saw a positive in this story. For the first time Ukrainian society has discovered for themselves who Greek Catholics are and what their origin is. For many it was a surprise. It evoked mixed feelings. But this is one of the important elements of the beginning of a real dialogue, when we know who our interlocutor really is,” said His Beatitude Sviatoslav.

The Head of the Church noted that he personally did not see any obstacles to communicating with the Orthodox brothers in connection with the discussion around common roots. “Moreover, when we want to look for ways to move closer to one another, this path is to find common ground. And we are united by a common Mother,” he said.

According to him, we have to rediscover that we come from the same baptismal font. We were born in the waters of the Dnieper. We are children of the same Baptism which we are to confess.

“If we confess,” said the Primate, “that we share the grace of the same Baptism, then we will realize that we can pray together. For if we pray together, we confess ourselves as Christians. If we can understand that we used to have common roots for many centuries and our mother cathedral used to be our common cathedral, then it will help open this Divine Wisdom which is embedded as the civilization matrix of Kyiv Christianity in our history, in our identity. These, in my opinion, are the foundations which already unite us.”

The Head of the UGCC recalled the statement of Pope John XXIII, who convened the Second Vatican Council and said the following phrase: “There is more that unites us with our Orthodox brothers than disconnects.”