God calls us to see what is unseen, since the invisible world is an inevitable part of God’s creation, Head of the UGCC on the Day of the Intercession of the Theotokos 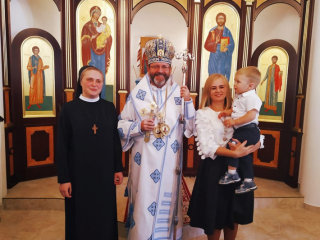 People are too much concerned about a material world, so we should not forget about important spiritual values, emphasized Head and Father of the UCC in his homily on the Day of the Intercession of the Theotokos, on Monday, October 14.

The Major Archbishop pointed out that this holiday is especially worshipped and loved among our people. As the legend says, this day in the Blachernae church in Constantinople, the Blessed Virgin Mary came out accompanied by angels and saints (St. John the Baptist and St. John the Evangelist among them), they had jointly said a prayer. Later, hostile troops, which menaced residents, stepped back.

“In today’s holiday God is calling all of us to see the unseen, since the invisible world is an inevitable part of God’s creation! God created visible and invisible world. Furthermore, a visible world is subordinated to an invisible one and is directed toward it. And the one who is able to feel the greater purpose and value – is able to win in a terrestrial world”, said Head of the Church.

“On this holiday we are witnesses of a truly special spiritual event: we have seen its visible and invisible signs, mainly how our Sr. Omeliana took her final vows of poverty, chastity and obedience. In other words, gave up everything to become a witness of a truly existed Kingdom of God. A visible world exists, and when our earthy life is over, eternity is waiting for us. The very sense of monastic life is in showing people that Kingdom of God is among us”, the leader o9f Greek Catholics stated and added:

“Today we are glorifying the Blessed Virgin Mary for choosing you her daughter and granting you her shelter, while God will lead you throughout a life”.

His Beatitude Sviatoslav also wished sister to persevere and withstand temptation and desperation, having Jesus as a source of joy.

“When our community sees you, a young consecrated person, they feel like they are full of God’s light. Because if nowadays a young girl is ready to give up her life for what is invisible, that nation is unbeatable”, Head of the Church is convinced.

It is worth to mention that Sr. Omeliana Senyk took her final vows in Holy Intercession Convent in Kyiv, in the presence of Head and Father of the UGCC His Beatitude Sviatoslav, priests, parishioners and nuns. Addressing to Sr. Omeliana, the Archbishop said: “it is said that the one who is great in God’s eyes is the one who has built a church. But the one is greater – who brought up a consecrated person… Sister, the Church will be gloomy without you… Thank you for having courage to answer for God’s calling, for having courage to hear what God is calling you to is real and makes you real too”.

The whole Church and the congregation sincerely congratulate Sr. Omeliana, granting her support and prayer.