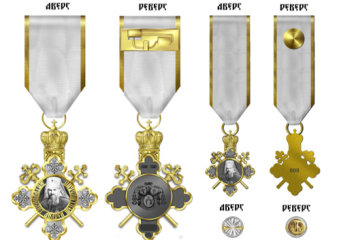 The Head and Father of the UGCC, His Beatitude Sviatoslav, signed a decree establishing and proclaiming the Order of Metropolitan Andrey Sheptytsky.

“In honoring the memory of the righteous Metropolitan Andrey, the Synod of Bishops of the UGCC, held in Lviv-Briukhovychi on September 2-11, 2018, decided to establish the Order of Metropolitan Andrey Sheptytsky as the highest award from the Head of the UGCC to honor people for special merits,” the Decree says.

“This righteous man was not only the Head of the local Church, which he led in difficult times with tireless responsibility, but also the spiritual leader of his people, a voice of conscience for them, a person of extraordinary qualities and deeds. Through his sacrificial work and fervent prayer, he formed the pastoral, intellectual, cultural, international, diplomatic and, in particular, the state-making face of our Church. His ministry as a shepherd and ethnarch of the nation, who made the highest sacrifice in the fight for independence and freedom, was deeply rooted in God and the entire dedication to His holy will. With such qualities, this Ukrainian Moses went down in history, giving us, his descendants, an example of unwavering loyalty to the Church and to the nation,” the decree states.

It is worth noting that the Head of the UGCC proclaimed the Statute of the Order of Metropolitan Andrey Sheptytsky as a separate Decree:  “The Order may be awarded to individuals, public or church institutions, representatives of the Churches and religious communities, as well as lay persons, in particular, public figures who, by their work, embody the principles by which the Metropolitan Andrey lived and served in the Church,” is written in the Statute.