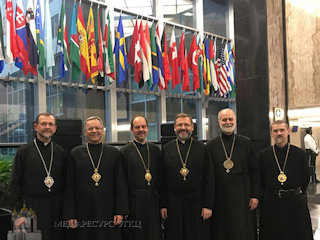 December 9, 2019 members of the Permanent Synod of Bishops, which is currently being held in Washington, headed by His Beatitude Sviatoslav, Father and Head of the UGCC paid a working visit to US Secretariat of State, where they arranged a meeting with representatives of this important institution.

The first who accepted a delegation from the UGCC was George P. Kent, Deputy Assistant Secretary of State for European and Eurasian Affairs.

Sides discussed an actual internal political situation in Ukraine and role of Churches and religious organizations in it. During the meeting US State Secretariat and the UGCC shared their thoughts about various important issues of church and socially political life in Ukraine and Ukrainian settlements, particularly in the USA.

To keep the meeting in mind, His Beatitude Sviatoslav presented Mr. Kent an illustrated edition of “Persecuted for faith”, dedicated to the clandestine period of the UGCC on its mother country under the communist regime.

Apart from that, His Beatitude Sviatoslav together with the members of the Permanent Synod and Secretary of the Synod bishop Bohdan Dziurakh visited the office of Samuel Brownback, Ambassador at Large for International Religious Freedom.

During the meeting they discussed issues concerning state and church relations and religious freedom in a modern world overall and in the scope of actual socially political situation in Ukraine.

George P. Kent is an American diplomat serving as Deputy Assistant Secretary of State for European and Eurasian Affairs since September 4, 2018 and his diplomatic early service has included assignments in the U.S. diplomatic missions to Poland, Thailand and Uzbekistan.

Sam Brownback, in full Samuel Dale Brownback is American Republican politician, who served as a member of the U.S. House of Representatives. In 2007 he declared his position to campaign for the presidency of the USA but later he withdrew from the race because of campaign fund-raising shortfalls. Was elected a governor of Kansas was sworn in as governor in January 2011. Has served as an ambassador-at-large for international religious freedom since 2018.