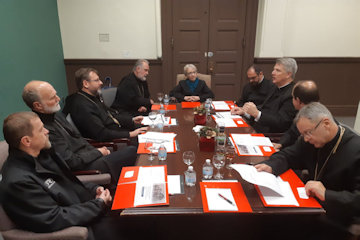 On December 9, 2019, His Beatitude Sviatoslav and members of the Permanent Synod visited the American Catholic University in Washington, DC, where they met with the Dean of the Faculty of Theology and Religious Studies, Fr. Dr. Mark Morozovic, as well as Professor Robin Darling Jung and Fr. Stephanos Alexopoulos, Principals and Teachers of the Eastern Christian Studies Institute of the American Catholic University in Washington D.C..

During the business meeting, the bishops of the Ukrainian Greek Catholic Church discussed with the leaders of the Faculty of Theology the possibilities and prospects of cooperation in the academic field of various institutions of the UGCC with the Institute of Eastern Christian Studies.

In addition, the delegation of the UGCC visited the Oriental Library of the University. As a sign of respect for this important Catholic institution, the Head of the UGCC presented to the library a series of publications under the common title “Kyivan Church.” Also, a copy of the unique English-language edition written by the professor from Kyiv, doctor of physics and mathematics Mr. Vasyl Shenderovsky “May the light of science never die” was given to the library, where dozens of biographies of prominent figures of Ukrainian science, culture and spirituality are collected. The book “Persecuted for Truth” published by the Institute for the History of the Church of the Ukrainian Catholic University, about the story of the UGCC’s martyrdom during the communist persecution of the last century, has also become a valuable gift to the library of the American Catholic University.

On the following day, December 10, 2019, His Beatitude Sviatoslav and the Synodal Fathers held a working meeting with the President of the American Catholic University in Washington D.C., Professor John H. Garvey and the Dean of the Theological Faculty Dr. Mark Morozovic.

First of all, the bishops shared their impressions of their visit to the university and emphasized the importance of continuing and deepening Eastern Christian studies at the university. Members of the Permanent Synod expressed their hope that the program of Ukrainian church studies would help university students and other interested persons and structures to discover the wealth of the Christian East in its Byzantine-Ukrainian tradition.

During the conversation, particular attention was paid to the role of the laity in the life and mission of the Catholic Church. The Head of the Ukrainian Greek Catholic Church introduced the guests to the patriarchal movement at the UGCC as a manifestation of the proactive position of laymen who sought to maintain a living connection with the Mother Church.

For his part, University President John Garvey thanked for the interest on the part of the Ukrainian Greek Catholic Church in theological studies and programs being implemented at the university and assured of his support.

It should be reminded that before the Heart-to-Heart Celebration Week, Bishop Vasyl Losten, the Bishop Emeritus of Stamford and a graduate of Catholic University of America, donated five million dollars to the establishment of the Center for Ukrainian Church Studies at the newly established Eastern Christian Studies Institute. Bishop Losten noted that this gift was only the beginning and that he would seek other donors to support the study of the Ukrainian Church and its spirituality.

Press Service of Secretariat of Synod of Bishops of UGCC