Head of the UGCC on Roman Catholic Church of St. Joseph in Karaganda: We thank God for proclaiming freedom during slavery 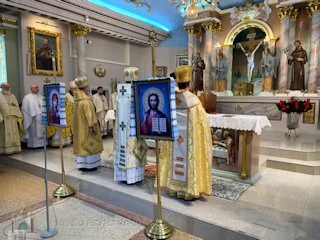 The kingdom of God is always present between us. Even in the most difficult period of our lives, the Lord sends people who testify that Heavenly Father is always there, and near Him we can change to become better.

The Father and Head of the UGCC emphasized this in his sermon to the faithful during the Divine Liturgy at the Roman Catholic Church of St. Joseph in Karaganda on Monday, December 16, 2019. After the Liturgy, everyone present prayed the Panahyda at the tomb of the confessor of faith Bishop Olexandr Hira. The service was held as part of the pastoral visit of His Beatitude Sviatoslav to Kazakhstan.

“Jesus Christ says that the Kingdom of God is between us, for it is nothing but the living and real presence of God among His people. When the Creator is among us, we are different. We build our community, the parish, the Church in a completely different way than people that do not have a sense of presence of the Kingdom of God. And the rest of today’s Gospel is about coming in the glory of our Savior, Who will judge both the living and the dead. However, these parts of the Gospel are strikingly interconnected. After all, if the Kingdom of Heaven signifies the coming and presence of our God between us, it means that our whole life is a preparation for His coming,” said the Primate.

According to the Head of the UGCC, the Holy Fathers of the Eastern Church said that in the history of the Church we can see three ways of the presence and coming of God to us: the first coming – when Jesus became a man, the second – during the Sacrament of the Eucharist, the third – the return of Jesus from heaven to earth (end of the world).

According to the bishop, the temple of St. Joseph in Karaganda played an important role in the history of the Catholic Church on the territory of the then Soviet Union. It is related to the story of a prominent figure, the underground bishop Olexandr Hira, who is buried here. Bishop Olexandr Hira (1897–1983) is a Ukrainian church and cultural figure who at some point built and consecrated the church, in which he then served for Greek and Roman Catholics of different nationalities.

The Primate is convinced that the presence of clergymen in difficult Soviet times testifies that even in difficult circumstances God does not leave His people, but is nearby.

“This temple, which was wonderfully constructed in the 1980s, was another visible sign of the presence in Karaganda of the Kingdom of God. For our Ukrainian Greek Catholic Church, this temple is unique, because here, for the first time since the elimination of our Church by the Stalinist regime, our underground fathers were able to freely celebrate the Divine Liturgy. Even today, priests of the Latin and Byzantine rites were together and communing around the altar,” said His Beatitude Sviatoslav.

And later he added: “And today you are celebrating the Independence Day of Kazakhstan. I congratulate you! For true freedom and independence is only where God is present. As the apostle Paul says, where the Spirit of the Lord is, there is freedom.”

At the end of his visit to Kazakhstan, the Head of the UGCC in the capital city of Nur-Sultan visited the Embassy of Ukraine in the Republic of Kazakhstan and the Greek Catholic Church of St. Joseph.