Christmas is the source of victory over the fears of modern man, His Beatitude Sviatoslav in the Christmas Pastoral Letter 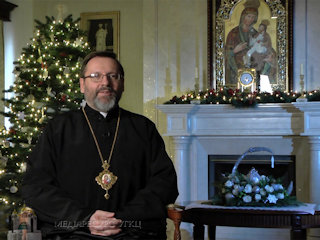 Today the angels in heaven sing and celebrate; the joy of the Saviour’s coming on earth dissipates all the fears and uncertainties of human life, for “God is with us,” once and for all!

His Beatitude Sviatoslav, Father and Head of the Ukrainian Greek Catholic Church emphasized this in his Christmas Pastoral Letter to the clergy, monastics, and all Ukrainians in Ukraine and throughout the world.

According to him, The Newborn Saviour is the incarnate Love of God, who as the only and eternal source of joy dispels fear.

“Authentic love is not a temporary or passing human emotion, but a life-giving power, the expanse of life, given and guaranteed by God Himself. Only in the space of Divine love and joy can human beings fully live, develop, and be themselves. God does not desire for His creation to be afraid, and thus in the Nativity, He comes to us as a vulnerable child. The Son of God allows Himself to be laid on hay in a manger, He allows Himself to be embraced by human hands, to be fed at the human breast of the Mother of God. The Almighty God, who needs nothing, makes Himself needy, helpless, and dependent on the warmth and tenderness of human love! Today He makes us capable of opening our embrace to God and neighbour without fear,” noted the Head of the UGCC.

According to the Archbishop, humans are fearful because, being separated from God through sin, they feel abandoned and lonely: confronting the unknown world alone and unprotected before its hostility. When people are closed to the love of their Creator, they are fearful of Him, erroneously perceiving God as a hostile and foreign power, which seemingly might threaten them, and so they seek to build their life without Him.

“A human being, having distanced himself or herself from the face of God, falls into a place of constant fear for their life in the face of death. It is this fear that is the tool of evil, which inevitably takes over and paralyzes a person, takes away his or her freedom, deprives them of joy and hope. A person without God is also afraid of his or her neighbour, the foreigner, the emigrant, as subconsciously they see them as competitors for their illusory space of security and plenty. In the end, such persons fear themselves, their weaknesses and limitations. They are afraid of failing to fulfil the expectations of others, they are afraid of being a failure in learning and work in the context of increasingly aggressive competition in the world,” emphasizes the spiritual leader of the Greek Catholics.

He observed that the Son of God was born in a human body in order to overcome the very reason for a person’s alarm, fear, and uncertainty.  He is born in our midst in order to remove the paralyzing power of our contemporary fears and anxieties, and to say to the person of the XXI century, to say to each one of us: “Fear not!”

“Christmas is the source of victory over today’s fears: fear of the future and the unknown, fear of others, fear of death. In celebrating the birth of our Saviour, His joyful entrance into the horizons of humanity today, let us not allow anyone to frighten us. The word of angels spoken today “Fear not!” is also directed to the Ukrainian people in the midst of the challenges we face in this historical period of our nation’s existence. If “God is with us” then who can frighten us, take away or imprison our will to defend our country and people, our desire for true justice, dignity, and liberty?” said His Beatitude Sviatoslav.

And later he added: “Christmas in the unification of God with humankind: God Himself enters into human living space and begins living as a human being, accepting all discomforts, challenges, and threats. Let us rejoice, therefore, for we are the ones whom Christ in His Nativity has liberated from fear, granting us joy in love. He will also renew our capacity to love God and neighbour. In Him are the foundations of our national, state, and ecclesial existence.”