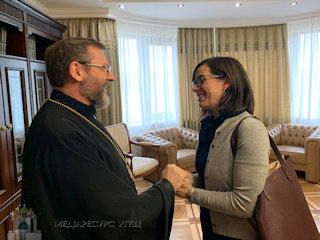 On January 24, 2020, at the residence of the Head of the Ukrainian Greek Catholic Church in Kyiv, His Beatitude Sviatoslav, Father and Head of the UGCC, met with Ambassador Extraordinary and Plenipotentiary of Canada to Ukraine, Mrs. Larysa Galadza. The meeting was held at the request of the Ambassador, who launched her diplomatic mission in Ukraine in November 2019.

At the beginning of the meeting, His Beatitude Sviatoslav congratulated Mrs. Galadza on the beginning of her service in Ukraine and wished fruitful work for the good of the Ukrainian and Canadian peoples. The Head of the UGCC also thanked for her presence during the episcopal consecration of Stepan Sus at the Patriarchal Cathedral.

The Ambassador thanked His Beatitude Sviatoslav for his condolences, which he expressed on the day of the Ukrainian plane crash in Iran. “It is important that your condolences have been directed to all the relatives of the dead, regardless of nationality and religious affiliation,” said Larysa Galadza.

Thereafter, the parties discussed a wide range of issues, paying particular attention to the role of the Church in the current circumstances of the life of the Ukrainian state.