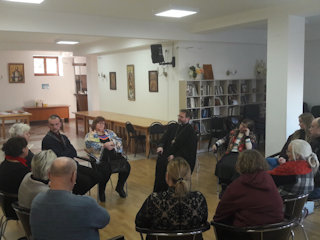 On January 21, 2020, at the Basilian Monastery of St. Basil the Great in Kyiv, the Head of the UGCC His Beatitude Sviatoslav met with members of the families of Heroes of the Heavenly Hundred who died during the 2013-2014 Revolution.

In his welcoming speech, His Beatitude Sviatoslav thanked all the present and asked them to share how they had lived the last year and with what they entered into a new one. The participants of the meeting had the opportunity to talk about their pains, joys, and difficulties, which, due to lack of proper justice, accumulated a great deal of frustration.

After each of the participants expressed his opinion, His Beatitude Sviatoslav assured the family members that our Church would always keep the defense of those who had been wronged, and asked not to lose faith in the final victory of the truth.

The families also asked the Head of the UGCC not to forget about them, to remind the high officials about their pain and their hurt. To this His Beatitude Sviatoslav replied that he is always trying to be the “voice of their pain” and urged those present not to close in themselves, but on the contrary, when hurting, to share it with others. He also called on not to fall into despair and not to remain silent, because “the fight is not over yet, one must not be afraid to defend his position.”

Further, the Head of the UGCC presented the activities of our Church, in particular he told about the convening of the Patriarchal Council, which will be held in August this year in Lviv.

At the conclusion of the meeting, addressing those present, the Father and the Head of the UGCC said: “You are the voice of conscience of those who have suffered in the Maidan, addressed to us all.” He assured that “no matter how the political winds may change, the Church will always be with you.” And they, as members of the families of the Heroes of the Heavenly Hundred, must gather and support one another and not let anyone dishearten them, because no drop of Heroic blood was in vain.

At the end of the meeting, His Beatitude Sviatoslav blessed the members of the Heavenly Hundred Heroes’ families and presented them with commemorative gifts.

Reported by the UGCC Department of External Relations in Ukraine