UGCC Head on Sunday of the Word of God: I ask you to read the Scriptures every day 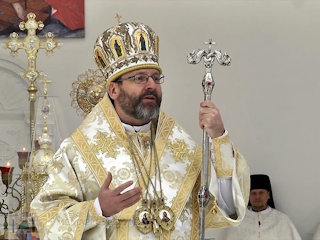 I would very much like every daughter and son of our Church to draw on God’s strength daily by reading the Word of God. And so we could grow in the knowledge of God. Because so often we do not know the God in whom we believe. The Father and Head of the Ukrainian Greek Catholic Church said this during his sermon to the faithful at the Patriarchal Cathedral of the Resurrection in Kyiv.

The Primate noted that today the entire Catholic Church throughout the world is celebrating for the first time the Sunday of the Word of God, set by Pope Francis in a separate letter. “ I would like all of us Christians to say, ‘Without the Word of God we cannot live.’ I urge you to read the Scriptures daily,”called on His Beatitude Sviatoslav.

The preacher said that on this day, which is called the Sunday after the Epiphany, the evangelist Matthew focuses our attention on a special moment in the life and mission of Jesus Christ.

“Matthew shows us today that this is the moment when God begins to speak to man in human language,” said the Head of the Church.

Matthew also shows us the Christ who begins his public ministry – the beginning of the proclamation of the Gospel. “The Word of God, the Gospel is not just some knowledge, a doctrine, a set of ideas. The Word of God is a Divine Person – the Son of God Jesus Christ,” notes the spiritual leader of the Ukrainians.

We see the moment when God the Father sends His Word, which has been with Him and in Him from time immemorial. Now we see the Word come to us. By the power and action of the Holy Spirit, it enters our human life.

Christianity is a space of living communion, according to the Primate, an opportunity for man to speak to God and for God – to man. It is a space of divine-human relationships.

Early Christians tell us that the Word of God is the nourishment we feed on, so that, according to the Apostle Paul, we can grow to maturity in Christ. “Every time we read the Scriptures, we enter into dialogue, communion with God. For our God is not a dumb God, but God-Word, who still speaks to us today. That is why it is so important to read Scripture in the community. For, as Christ says, for ‘where two or three are gathered in my name, there am I among them,’” the Head of the UGCC reminds.

His Beatitude Sviatoslav thanked those who are engaged in the biblical apostolate at the UGCC, and noted that in our Church reading of the Holy Scriptures is considered a sign of a living parish, a vibrant Christian community.

Also, the Head of the Church thanked Pope Francis for reminding us once again of the place and role of Scripture in a special mission – the mission of unity among all Christians.