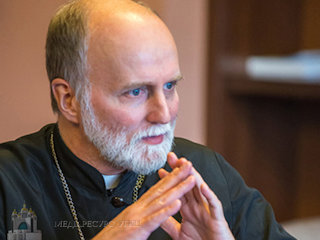 Representing the Philadelphia Archeparchy and the Metropolia of Ukrainian Catholics in the United States, as well as the Ukrainian Catholic University community in Lviv Ukraine, I hold vigil and pray God: “Never again!”

The 75th anniversary of the liberation of the Auschwitz Nazi concentration camp is a solemn and mournful opportunity to reflect upon man’s capacity for evil.

Human sin has caused untold suffering in history. The Holocaust is an archetype of this sinful capacity. The Shoah is a quintessential sign of the potential of human depravity.  Evil is real. It needs to be named and confronted.

The Nazi crimes and those of their collaborators are to be condemned as well as all antisemitism that regrettably is raising its ugly head in our country and in many countries of the world.

We stand together with the Jews of the world and with all victims of genocide, violence, totalitarianism, and inhumane ideologies. We pray for all living, those yet unborn and especially for the children of the world that they may know the fullness life, liberty, justice, and peace.

May each one of us, where we live and work, witness to the gift of human dignity that God gives us. All of us. No matter what our race, religion, nationality, gender, or disability.

May we speak and write, think and act in ways that counter hate. May we build bridges, not walls. May the love of our faith be the true creed of our life.

On this day of remembrance let us pause to honor all those who perished and those who heroically sought to save the condemned.

January 27, 2020, International day of commemoration in memory of the victims of the Holocaust.

Archbishop of Philadelphia and

Metropolitan of the United States for Ukrainian Catholics