Today, the Martyr Church receives such a title, not me, Head of the UGCC while receiving the Doctor Honoris Causa diploma 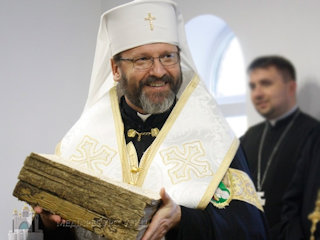 On Friday, January 31, 2020, the Head and Father of the UGCC, His Beatitude Sviatoslav, paid a visit to the Lviv National Agrarian University. During the solemn academy, His Beatitude was awarded the LNAU Doctor Honoris Causa diploma.

In his speech to those present, His Beatitude Sviatoslav expressed deep gratitude for such a distinction. “Today, it is primarily the Martyr Church that receives such a high rank, not me. It is to the Ukrainian Greek Catholic Church, which is the soul of the Ukrainian people and the Ukrainian world, that I dedicate this doctorate. In addition, I want to dedicate it to my great predecessor, the righteous Metropolitan Andrey Sheptytsky,”said the Archbishop. In his opinion, Metropolitan Andrey Sheptytsky made a lot of efforts to foster the culture of agriculture in our nation.

In his speech, the Head of the Church also mentioned the Appeal of the Synod of Bishops of the Kyiv-Halych Supreme Archbishopric of the UGCC regarding agrarian reform in Ukraine.

“Now we feel that our land is in great danger, not because one does not truly understand the value of it, but because people have different temptations, which are an internal and external threat for Ukraine. That is why through our Appeal we wanted to proclaim certain moral principles,” said the spiritual leader of the Greek Catholics.

“In the Holy Scriptures, the word ‘land’ means space of life and communion, not material resources. It is a space where one feels he can live life to the full. And what is the land for God’s people? In one of the Psalms it is stated: ‘As the deer pants for the water brooks , So pants my soul after you, God.’ The people of God understood that the land is God’s gift, where you can touch the presence of the living God.”

He said: “When we talk about certain moral principles, for us Ukrainians, the land is a gift of God. If we look at the percentage of Ukrainians in the total number of people in the world; as well as how much percent of the black soil is in our country and how much it is in the world – we will understand how much the Most High loves us. Therefore, it is our promised land. It is intended for all and no one can be its absolute owner, even the one who gets the ownership of land through the law of the state.”

His Beatitude Sviatoslav states that the UGCC has always encouraged the culture of work, particularly on the land.

“The culture of labor was ruined through the Holodomor and Soviet collectivization. Our Church has started to consider how to revive the cooperative movement in Ukraine so that our peasants do not rent out their land for nothing,” said the speaker.

He believes that it is not necessary to politicize the topic of land reform, especially, not to make it a cheap political confrontation.

“We also appealed to our statesmen, in whose hands there is land reform that needs to be done. It is not true that the Church is against land reform, but in the Appeal we say that land reform has two goals: the first is the development of land resources, not their predatory exploitation; and the second goal is a fair distribution of land. After all, according to the teaching of the Catholic Church, the great accumulation of land in the same hands is negative. Why? Because this is contrary to the principle of universal purpose of the land. That is why we ask our legislators to take their time and turn to public figures and activists.”

In addition, His Beatitude Sviatoslav called for a responsible attitude to the environment: “If we Christians believe in the Creator, then we must honor His creation. Environmental responsibility is an integral part of the Christian faith, though we are not fully aware of it. We think that ecology is not always about us. The environment is my outer body, as Christian philosophers say.”

In his speech, the Head of the UGCC also mentioned the first ecological encyclical in the history of the Church of the Holy Father Francis Laudato Si: about concern for a common home.

“I want to invite your institution to cooperate with the Church,” said His Beatitude in the end. “Collaboration can be at many different levels: academic, pedagogical, also, at the level of exchange of experience and information.”

It should be noted that after the speech of the Head of the UGCC, greetings were received from the faculty and staff of the University, the clergy, and the authorities. In addition, a festive concert later took place.