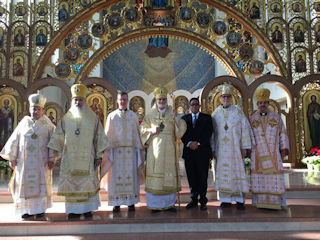 On January 29, 2020, the bishops of the Philadelphia Metropolitanate held a regular working meeting to discuss the life of the Ukrainian Greek Catholic Church in the United States of America and plan for this year. The meeting was held in Philadelphia.

A special event at the UGCC will be the Patriarchal Council in Lviv at the end of August this year. In preparation for it, every eparchy of the UGCC in the whole world holds its councils. The theme of the General Patriarchal Council is “Emigration, Settlement, and Global Unity.” The US eparchies have also been thinking about immigration, as in recent years the number of newcomers has increased significantly. In this context, it became important to discuss the first stage of a thorough sociological survey and to prepare for its second stage, which will include personal interviews. The purpose of this study is to understand the needs and challenges of the Metropolitan faithful to better serve them.

The bishops therefore set about planning joint events in 2020, specifically the organization of a Metropolitan clergy congress scheduled for October 2020 in Chicago.

The following day, the bishops attended a conference organized by the Philadelphia Archeparchy on “Spiritual and Theological Conclusions About the Crisis of Violence Against Vulnerable People.” The speakers at this conference were Fr. Hans Zollner, Jesuit, President of the Center for Child Protection at the Gregorian University in Rome and Deacon Bernie Noyader, Head of the Department of Child and Youth Protection of the Conference of Catholic Bishops of the United States of America.

Based on the information provided by Deacon Volodymyr Rad’ko