In humility, let us confess our sins before the Lord, and having received the forgiveness, we will hear the command: “I tell you, arise!” Head of the UGCC 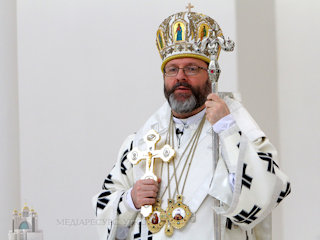 This Sunday of Lent, as all humanity has suffered from the first ever modern pandemic, the Word of God about the connection between sin and disease, repentance and health, God’s mercy, and the hope of overcoming the unmanageable disaster sounds with great force. A proud modern man who at some point believed that he could build a new powerful global civilization, denying all his relationship with God, feels this Sunday especially humbled and threatened.

On March 15, 2020, His Beatitude Sviatoslav, Father and Head of the UGCC, said this in his sermon during the Divine Liturgy.

The Head of the UGCC noted that the little creature invisible to the human eye – a virus smaller than a living cell – “immediately broke the illusion of omnipotence of modern mankind, collapsed the world economy, made whole countries and continents unsettled.” “It is a feeling that modern societies have truly become paralytic: having the highest level of development of medicine in human history, we are not only able to prevent this infection, but also to control the ways of its spread,” – said His Beatitude Sviatoslav.

He explained that it is to this paralytic, broken and threatened person today that the Savior Himself preaches the good news: “Son, daughter, your sins are forgiven!”

“As the experience of our own sinful infirmity and our own restriction is necessary for spiritual growth, the experience of humbling the world community through the disaster of coronavirus can be a fertile moment for the maturation of modern humanity,” he said.

The Head of the UGCC called on the modern man to get rid of idolatry before himself and before the fruit of his own intelligence. “Today in humility, let us confess ourselves to being paralytic before the Lord, and having received the forgiveness of our sins through the great path of repentance, we will hear His command: “I tell you to rise!” said His Beatitude Sviatoslav.

“Everything will pass, and this pandemic will pass. Borders will open and normal ways of being together, communicating and building our future will resume. But after that quarantine will surely remain a joyful experience of God’s mercy on us! The joyful feeling that our lives are not in human hands, whose power is always limited, but in the hands of God! Even among the forced isolation of man from man, God did not close Himself from us, He is with us, and no virus has power over His healing hand. After Lent, the time of Easter joy will come. This is exactly what we are heading for today,” said His Beatitude Sviatoslav.

He called on all Christians today to be like these good friends of the paralytic and “bring before the Lord all the humanity that is experiencing a wave of its own powerlessness.” “We are praying for the health of the sick and healthy, for the elderly and the younger, for the health workers and heads of state. But at the same time, we pray for the mercy of God for each of us: ‘God, spare us and bless us, enlighten Your face on us and have mercy on us. Amen,’” concluded his sermon the Head of the UGCC.