Bishop Yosyf Milyan: Let us try to benefit from the abundant Christian life to its fulfilment, following medics’ recommendations 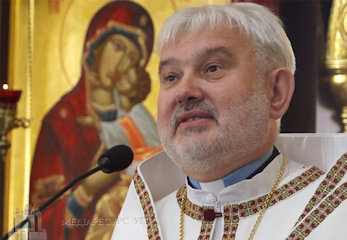 “We live in the world of total individualisms, which begets egocentrism. We tend to think that our omnipotence can defeat everything in this world. From the Scriptures we know a man a sociable person created by God. Christ was accompanied in His ministering by the disciples. We, on the contrary, are trying to set boundaries among us all”, mentioned bishop Yosyf Milyan in his homily during the Divine Liturgy in the Patriarchal Cathedral of the Resurrection of Christ, UGCC.

The bishop referred to the Gospel scene about an invalid man and those four who took a responsibility for him. “We often ask each other for a prayer. We accept it freely, in most cases. Yet, we don’t always realize how much we are obliged before this or that person. “I believe” is not enough to say. Our faith has to be active. In today’s Gospel, Christ indicates that faith is a basement. A man is saved through faith in Christ’s Church. That is why it is so important to be inscribed in the book of life through the mercy of baptism, practice of faith and common pursue of salvation”, the archbishop emphasized.

In his homily bishop Yosyf reflected on a problem of a virus and what it has to say humanity.

“Coronavirus speaks through deaths of thousands of people. A situation, which has appeared out of nowhere, what it has to say people? There are a lot of problems and viruses all around, yet the side effects are not that quickly spread as from coronavirus. Isn’t gender issue considered to be a virus, meant to destroy humanity, unless we fight against it? Won’t hate and envy destroy us from the inside? The perspective of fatal circumstances reaches far enough. Let us realize that we can do a lot of good in order to confront physiological and moral infection. Spirituality is a basement of our material life. Let us live to minister those, who need it most”, the preacher encouraged.

Last but not least, bishop Yosyf outlined that prayer is a powerful tool against spiritual and physical virus. Thus he called to “benefit from the abundant Christian life to its fulfilment, following medics’ recommendations so to protect ourselves from physical and spiritual illness. Be attentive to the needs of others and then God will look mercifully upon us and the whole world”.

Worth mentioning that in accordance with precautions of governments of different countries to avoid and prevent virus from spreading, the Ukrainian Greek Catholic Church announced about an opportunity to watch Sunday Divine Liturgy online. An option was taken up by more than hundred thousand of people.The UGCC Department for Information