His Beatitude Sviatoslav meets with His Holiness Patriarch Bartholomew 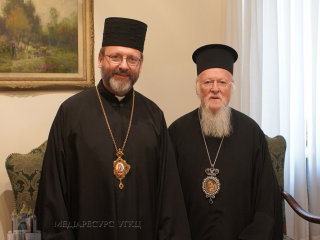 On September 16, at 12:30, the Father and Head of the UGCC, met with the Ecumenical Patriarch Bartholomew in the Vatican. The meeting was held at the home of Santa Marta, where the Holy Father Francis lives.

Upon his official visit to the Vatican, Patriarch Bartholomew met with His Beatitude Sviatoslav the next day to discuss the situation in Ukraine and the ecumenical relations between the UGCC and the OCU.

His Beatitude Sviatoslav, summing up the Meeting of Eastern Catholic Hierarchs of Europe, held in Rome on September 12-14, emphasized: “The Eastern Catholic Churches make their theological contribution to the tradition of the Catholic Church, helping it to express its global dimension. The Church cannot be limited only to its Latin tradition.”

The Head of the UGCC also suggested that Patriarch Bartholomew set up a mixed commission of the Orthodox Church and the Eastern Catholic Churches to “give a new impetus to the ecumenical dialogue.”

The Patriarch of Constantinople explained to His Holiness Sviatoslav his steps regarding giving autocephaly to the Orthodox Church of Ukraine and praised the openness of the UGCC in ecumenical communication. The Head of the UGCC recalled that this was their second meeting and expressed his joy over the fact that the children of the Kyiv Church remember that their Mother Church is the Church of ancient Constantinople.

It should be added that the meeting took place on the initiative of the Head of the UGCC in the framework of the official visit of the Holy Patriarch Bartholomew to the Vatican, organized by the Pontifical Council for Promoting Christian Unity.