Living faith, shown by the daily life of Christians, is stronger than the latest ideologies, Head of the UGCC in Spain 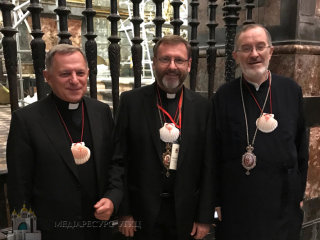 In Spain, in the pilgrimage center of Europe, Santiago de Compostela, continues the next plenary assembly of the Council of Bishops of Europe. The theme is “Europe, it’s time to wake up! Signs of Hope.”

Ukraine is represented by His Beatitude Sviatoslav, Father and Head of the UGCC, Archbishop Meczyslaw Mokshytskyi, Vice President of the Roman Catholic Bishops’ Conference of Ukraine, and Milan Shashik, Bishop of Mukachevo.

During the first day of the plenary sessions, its participants heard an analytical report by the famous French philosopher Chantal Delsol on “Catholicism in a Dechristianized Society”. During the discussion over the proposed analysis, the bishops discussed the presence of signs of Christian awakening and hope in the modern culture of a secularized Europe.

In his speech, His Beatitude Sviatoslav, based on the experience of the persecution of the UGCC by the communist regime and spiritual ministry in the conditions of war, emphasized that the strongest way of preaching the Gospel is the life of the Christian community itself. “The greatest distress of the Church is Christians who live contrary to their faith: by their actions they deny Christ, His truth,” said His Beatitude.

“At a time when there is a radical change in the very paradigm of society on the European continent, the living faith, shown by the daily lives of Christians, is stronger than the latest ideologies,” emphasized the UGCC Head.

He expressed confidence that the strongest sign of Europe’s hope is that people still believe in God.  “When your personal world, the world of your certainty and security, falls apart, one always seeks God and is especially sensitive to His Word. There are no atheists in the Donbas war!” said His Beatitude Sviatoslav.

This year’s plenary assembly of the Council of Episcopal Conferences will conclude its work on Sunday, October 6th.