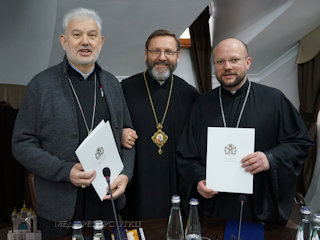 Father and Head of the Ukrainian Greek Catholic Church, His Beatitude Sviatoslav, with the consent of the Synod of Bishops, held in Rome from September 1 to 10, 2019, appointed Bishop Stepan Sus as Head of the Pastoral Migration Department.

The appointment decree states that the task of the Pastoral Migration Division is, on behalf of the Head and Synod of the Bishops of the UGCC, to provide pastoral care for the faithful of the UGCC in territories where the Church does not have its hierarchical structures.

Accordingly, Bishop Josyf Milian, who was in charge of the PMD, was recalled from his post by the Synod of Bishops of the UGCC.

“On behalf of the Synod of Bishops of the UGCC, we thank you for your many years of sacrificial work in this position, which is marked by numerous achievements. Thanks to your persistence and the concerted work of the professionals of the department, thousands of our Church faithful, scattered throughout the world, have been shrouded in the prayerful attention of the Mother Church. May the merciful Lord generously thank you with a multitude of His blessings for all that you have done for His glory and for the good of our Church, ”the decree reads.

His Beatitude Sviatoslav noted that this change had been made in accordance with the need for a  separate bishop, for whom this task would be the main one.

“According to the Ministry of Foreign Affairs, one million of our citizens leave Ukraine every year. And the Mother Church must follow them. We thank the Lord God that we now have such a bishop who will serve these lay people and priests only,” said the Head of the UGCC.

*** The Pastoral Migration Department was established to provide proper pastoral care for the faithful of the UGCC living in different countries of the world, where there are no UGCC structures yet. Recognizing this need and giving effect to the decision of the Synod of Bishops of the UGCC, held in Lviv-Bryukhovychi on September 2–9, 2008, with a decree of September 16, 2008, His Beatitude Lubomyr Husar created the Pastoral Mission Department. The Synod of Bishops of the UGCC (August 11-17, 2013 in Kyiv) agreed to change the name to “Pastoral Migration Department” (PMD).