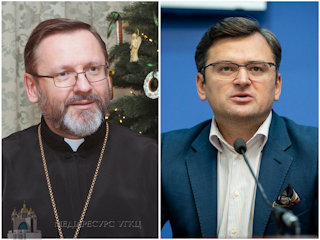 On February 6, 2020, His Beatitude Sviatoslav, Father and Head of the UGCC, met in Kyiv with Dmytro Kuleba, Deputy Prime Minister for European and Euro-Atlantic Integration of Ukraine. They talked about European identity, the Istanbul Convention, and gender ideology. The meeting was initiated by the Deputy Prime Minister.

First of all, His Beatitude Sviatoslav presented the vision of the UGCC for European integration of Ukraine. He stressed that Ukraine and Ukrainians are already part of the European space, because they retain their European identity and culture. “We are not going to Europe, but returning to the European community of peoples,” said the Head of the UGCC.

He also mentioned the visit of a delegation of the All-Ukrainian Council of Churches and Religious Organizations to Brussels in 2013, during which they presented the EU aspirations of the Ukrainian people to high-ranking EU officials.

Another topic of conversation was the Istanbul Convention. The Head of the UGCC spoke about the measures taken by the Church to combat and prevent domestic violence. He noted that this theme was even raised in his Christmas message, which was read in all the churches of the UGCC.

His Beatitude Sviatoslav emphasized the need to develop legislation on the prevention of domestic violence in Ukraine. “Our legislation in this area should be so perfect that there will be no need discussing the convention,” he explained.

During the meeting, participants also spoke about gender ideology. The Head of the UGCC presented the Christian vision of human sexuality. He noted that the UGCC has a clearly articulated position on the issue and that it is open to dialogue with anyone interested in the topic. As an example, His Beatitude Sviatoslav spoke about the Epistle of the Synod of Bishops of the Kyiv-Halych Supreme Archeparchy regarding the dangers of gender ideology. It was released in December 2016.