His Beatitude Sviatoslav: The priest of our Church is not only a minister, but also a builder of culture 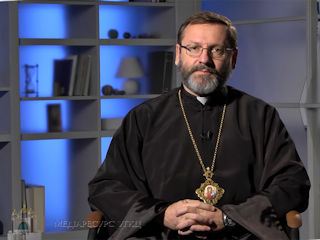 The Head of the UGCC noted that  our Christian rites and rituals are filled with profound theological and philosophical content. “Together, we must create an environment where our religious beliefs are transformed into certain values ​​that shape our actions,” he emphasized.

“If we divide the culture and the religion,” said His Beatitude Sviatoslav, “then both concepts are devalued to some extent. For many people, rites then become magical rituals and completely lose Christian content.”

According to the Head of the UGCC, the legalization of our Church was a time when Christian culture triumphed over atheism. This event gave us the hope to build a completely different state from the one that became the nations’ prison. “We always try to be open to the public at large. Particularly for those who do not share the Christian worldview. For them, we transform religious beliefs into certain universal principles. An example is the formulation of the Church’s social teaching. It has four foundations: the dignity of the individual, the common good, solidarity and subsidiarity (private initiative). Today it is a recipe for building a successful state. Thus, Christianity shows itself to be an open community, which is very happy to share what it believes in,”said the bishop.

“Only a culture that helps one to fulfill one’s desire for eternity will be a culture in its fullest sense. It can be called the culture of life,”summed up the spiritual leader of the Greek Catholics.